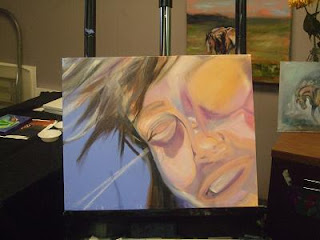 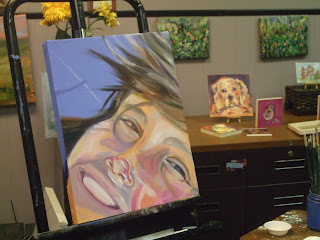 Su Nimon, an artist who has the neighboring studio to me at Second April Art Galerie asked as I was leaving for the day what I had been working on.  I told her putting paint ON the canvas and then taking paint OFF the canvas.   I was sneaking in a fun, quick portrait to get back in the saddle after the holidays.  I didn't anticipate not being able to leave the starting gate!  Or maybe I should say I encountered 'balking' of my muse!  I spent the last two days working on a painting of my daughter and ended right back where I started!

Luckily I have horses.  I have encountered balking before.  For those of you who are not horse literate balking is a term describing a horse who is asked to go forward and they don't.  Balking can go further to the point the horse is asked to go forward and they go backwards.   I have a horse who was prone to balking.  He came to me as a ring sour ex show horse and would balk when I  first got him.  I helped him get over this by listening to him.  I began riding him with a lighter touch and rewarding him with a 'release' when he responded.  As I listened to him he became a better listener to me.   He didn't need the martingales, whips and spurs that were said to be needed.

How does this help with a 'muse' that stalled and fizzled?  Just like the horse that had a stronger hand and louder voice used on him until he stopped in his tracks, the muse is waiting for the quiet so I can hear the whisper.

Okay, I won't fight with this painting.  I've already decided it may just need to be something other than what I thought it was going to be.  My job is to let it develop.  Loosen the reins and listen.  Now lets see if I can do just that!

PS  I wanted to share a link to this foal, Unique.  http://special.equisearch.com/blog/horsetalk/2010/01/bet-youve-never-seen-horse-like-this.html 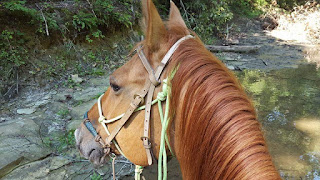 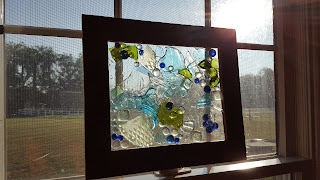 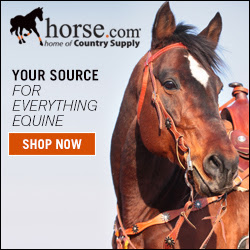 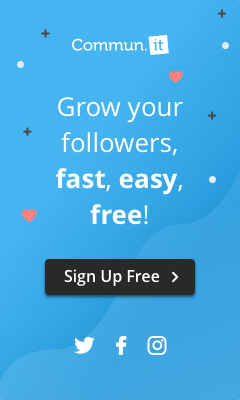 is my creative outlet in words. I am foremost a visual artist but there are times I can't be in my studio painting so I often come here and spill out whatever pops into my head. I like to write about my observations of my horses and animals - not so much as a factual 'how to' but a poking fun either at myself or people in general. I like to study animal and people behavior and then my artist mind does whatever it will with it. This is by no means scientific but purely based on my imagination and enjoyment of my animals.